Hudson Products (Hudson, Beasley, Texas, U.S.) is a leading manufacturer of air-cooled heat exchangers and axial flow fans. The company’s fiberglass Tuf-Lite axial flow fans have been in production for more than sixty years an d are a preferred fan for industrial applications. More than 250,000 Tuf-Lite fans are currently in use worldwide.

The Tuf-Lite fan series got its start in 1955 with the Tuf-Lite I, featuring a glass fiber-reinforced plastic composite blade. Since its creation, the fan has gone through a few iterations. The original fan was manufactured as a monolithic one-piece air foil that was molded as a hollow part. Tuf-Lite II was introduced in 1984 in order to increase the manufacturability of the fan’s parts. The TufLite III was introduced in 2004, reverting to the monolithic blade design, but keeping the clamping convention.

Hudson’s Tuf-Lite II and Tuf-Lite III fan designs use a proprietary vinyl ester resin in a resin transfer molding (RTM) manufacturing process. A proprietary leading edge protection is also embedded and a UV resistant coating is applied to the blade exterior. The fans are designed to resist corrosion and to maximize the strength-to-weight ratio. The fan blades incorporate an aerodynamic twist and taper designed to provide even air flow distribution and energy efficiency while also minimizing vibration.

Hudson recognized a need in the marketplace for a large diameter, low noise application fan and saw an opportunity for yet another iteration of the Tuf-Lite series. For the Tuf-Lite IV the company employed computational fluid dynamics (CFD) technology for a design that focused on low noise and efficient air flow.

The resulting Tuf-Lite IV design is modeled after the Tuf-Lite III, but is roughly 20% larger. Because of the fan’s increased size, the new design was not compatible with Hudson’s existing manufacturing equipment.

Hudson needed a press capable of handling the 5 meter by 1 meter tool that would be needed to mold the parts. Hudson’s composites presses were previously developed and built in-house, but for the new fan design the company turned to Wickert Hydraulic Presses (Hebron, Ky., U.S.; Landau, Germany) for a new custom press. In addition to increased size, the new blade design presented several production challenges. The design change meant changes in layup sequence, type of fiberglass, material configuration, number of layers, resin injection points and positioning of vent lines. A new epoxy-based resin system was also considered during the design phase, but over the course of development Hudson reverted to the vinyl ester it has used in past iterations. “Several custom options were included on the press that were specific to their molds,” says Tony Ackerman, regional sales engineer for Wickert. “We got together with [Hudson’s] mold vendor and collaborated on the design.”

“We didn’t know exactly how the resin front would flow across the part within the mold cavity,” explains Rizzo. “The point of convergence of that resin front was also a concern. With our existing designs – being an RTM application – the closed mold is vented so as we’re pumping in the resin over the part, air is escaping through the vent lines. Once the part is completely wet, the idea is to have the resin bleed out through the vent lines – so the positioning of those vent lines is very important in the mold tool. We want to put those vent lines at the point of convergence of the resin front as it is flowing over the part.”

Wickert also collaborated with Hudson on the control system for the press to set up the specific sequence, alarm system and integration with resin pump system. The automatic cycle was designed to optimize injection timing and pressure heating and cooling. Because an air bladder is used to create a cavity in the hollow fan blade, Wickert installed air actuation controls to tell the air bladder when to inflate at a specific time in the cycle.

“Our existing machines have a level of automation as part of the manufacturing cycle where the operator is able to initiate a resin injection, wet out cycle, then a heating cycle cure then cool down cycle,” says Rizzo “[Wickert] gave us a press that accomplished all those requirements – we were able to program an automatic operator cycle that functioned similar to what our existing presses give us with updated controls and a higher degree of functionality and control compared with our older machines.”

In addition, Wickert designed the press as a top acting hydraulic machine, which produces a clean and low working height.

“One of the custom features on the press is a upper heating platen that is able to swivel to present itself to an operator for cleaning and visual inspection,” adds Ackerman.

While the automation for the press is still being finalized and some software adjustments are still being made, Hudson has begun producing the Tuf-Lite fans and have shipped some units. The resulting fan blade meets all requirements. “The wider chord width and the swept profile allow the blade to operate with increased efficiency at lower RPM, providing a lower overall noise output,” says Rizzo. “Plus, we were able to meet these requirements with significantly fewer blades compared to existing design.” 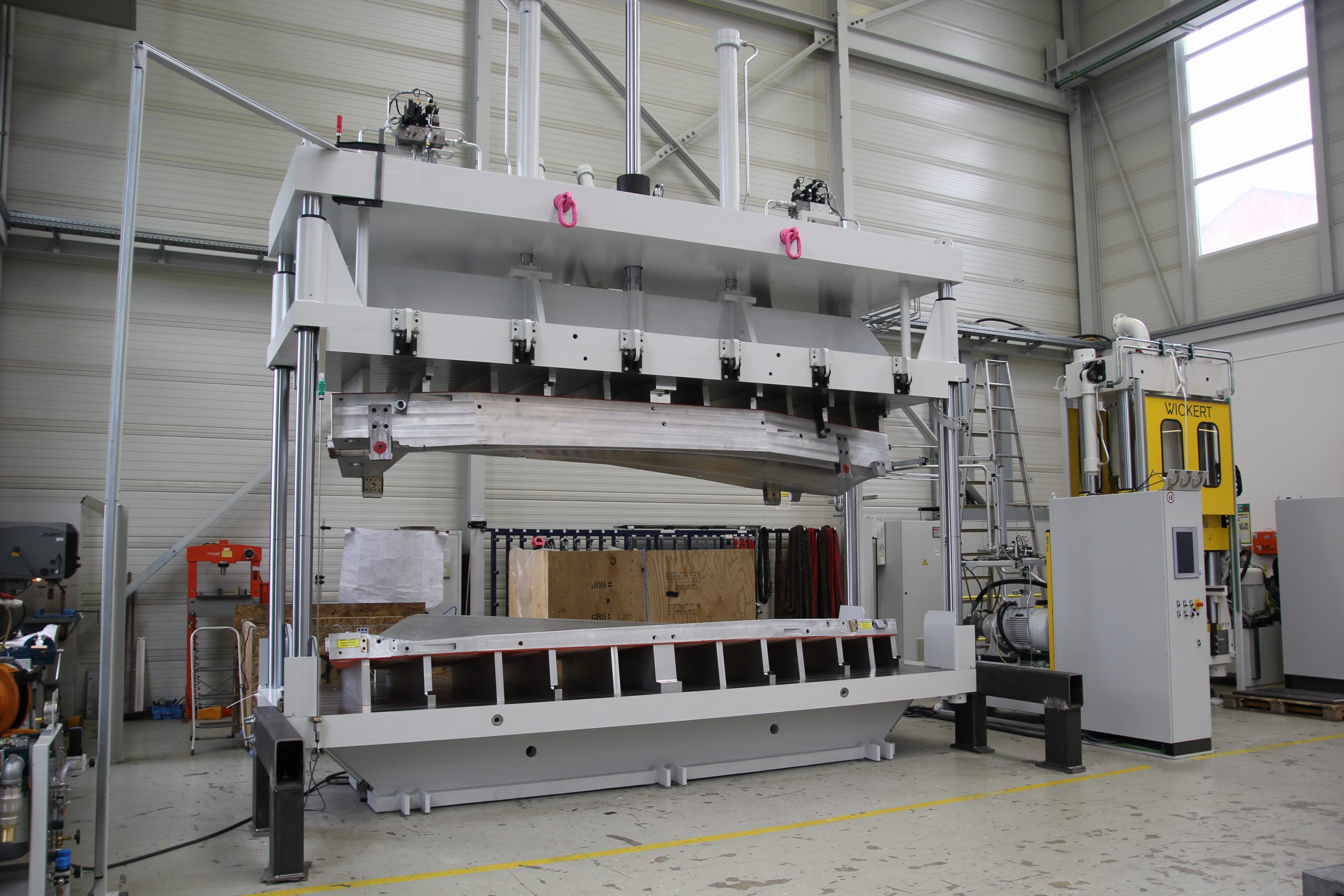 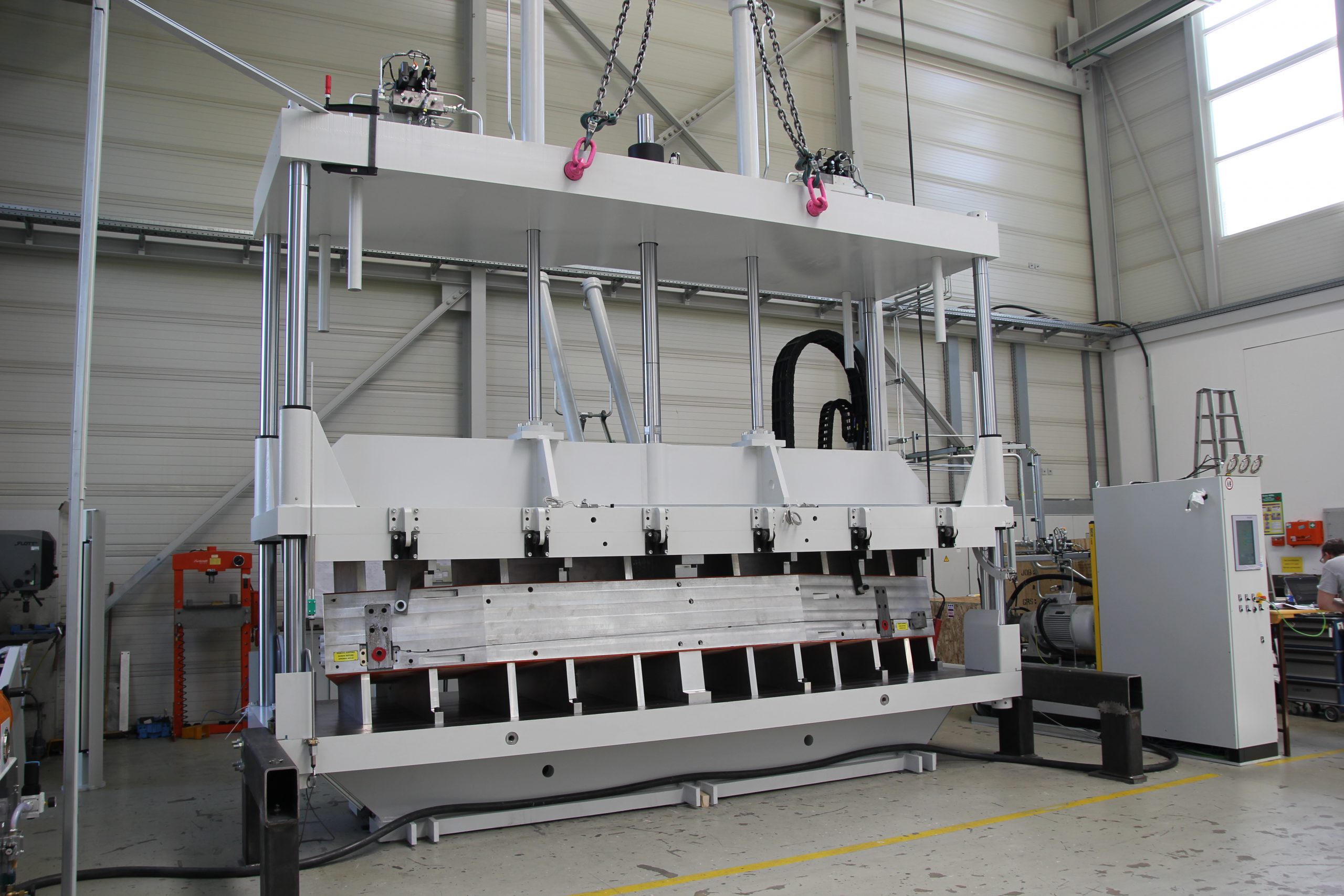 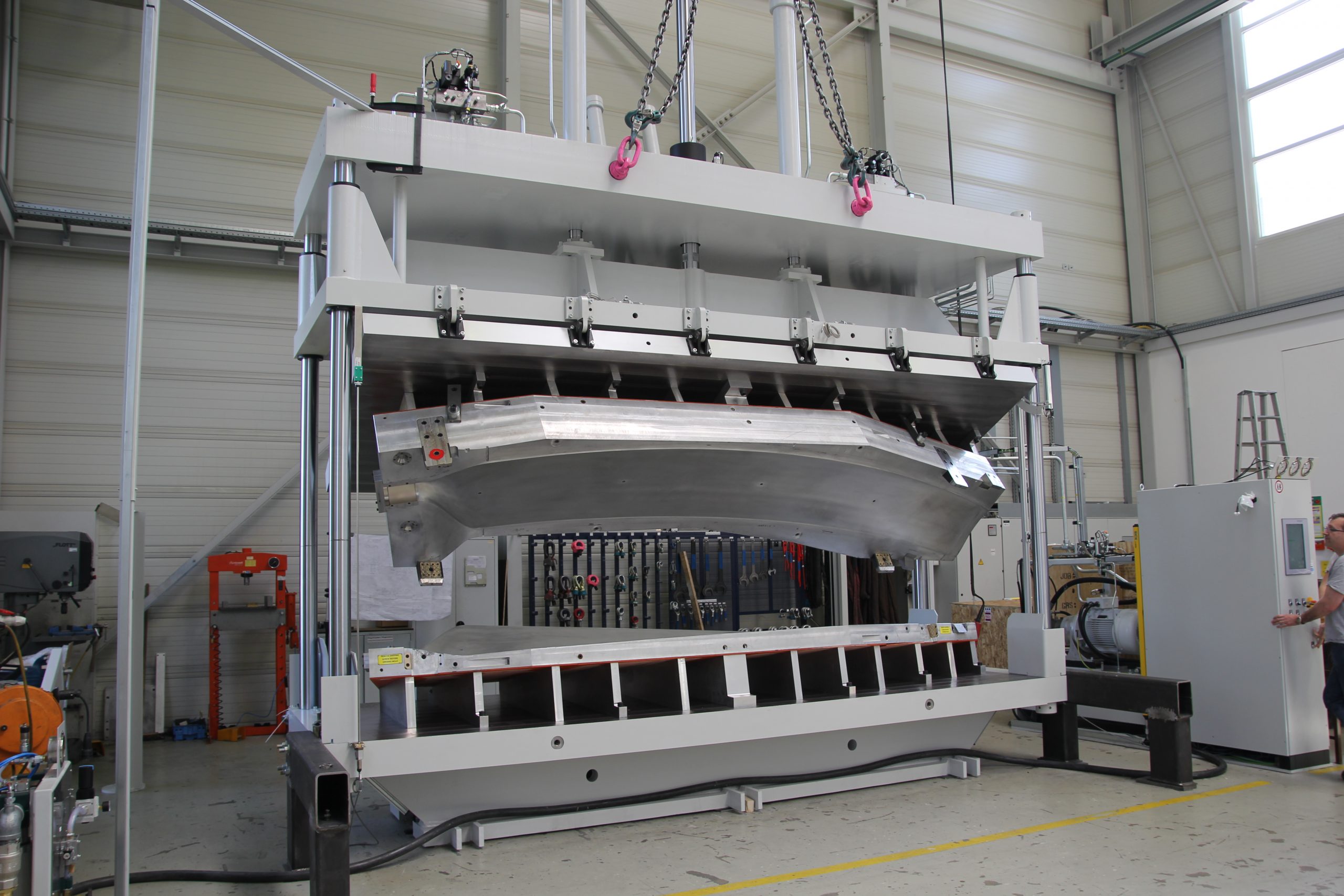